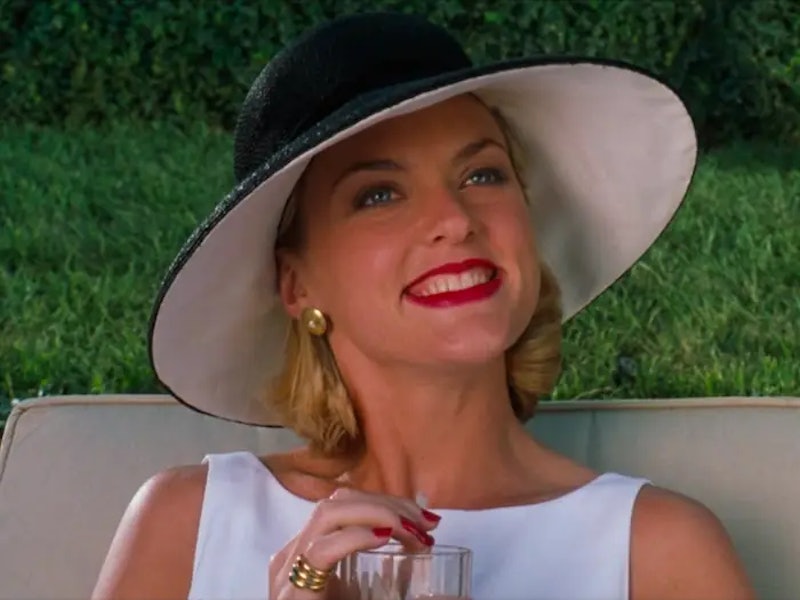 Meredith Blake deserved better. As the antagonist of Disney’s The Parent Trap, the 26-year-old publicist portrayed an iconic, Cruella de Vil-type of evil that made the beloved ‘90s film what it was. Pegged as snotty, self-serving, and detached from the joy of childlike shenanigans, Meredith — played by Elaine Hendrix — stands seemingly malicious but undeniably sophisticated while in the way of Hallie and Annie’s ambition to reunite their divorced parents.

Only recently, discourse about the film and Hendrix’s character points out that maybe she isn’t so evil after all, just hugely misunderstood. I mean, Nick Parker never even told her about the whole second-daughter, twins-separated-at-birth thing, and I, too, would freak out if a lizard was placed anywhere near my head.

“Meredith Blake was never a selfish gold digger, she was determined and opportunistic,” declared Hendrix, in character as Meredith, in a TikTok shared by E! News last year. “And if being compared to a strong, fashion-forward, successful woman makes me Cruella, then fetch me a dalmation and a cigarette holder, pronto.”

Whatever your moral quandaries about Meredith may be, there’s no denying that she has impeccable style. The blonde-haired, blue-eyed bombshell said it best: “Being young and beautiful isn’t a crime, you know.”

TikTok has certainly taken notice, with #MeredithBlake earning an impressive 98.8M views and counting. Meredith-focused content consists largely of users emulating her luxe aesthetic because, well, if you’re looking to strike the perfect balance between ‘90s glam and Old Money class, Meredith is the ultimate inspo.

Her cold but coiffed exterior gave way to iconic looks that still stand the test of time, each with their own high-fashion allure and country club cool. From her poolside attire to her knockout LBD, Meredith’s wardrobe is elegant and effortless, and she always looks straight out of an old Ralph Lauren advertisement.

Fortunately, as a result of her timeless taste, her ensembles aren’t that hard to replicate. Shop four Meredith Blake-inspired looks below. Just keep in mind that they don’t pair with trout — for the thousandth time.

We may receive a portion of sales if you purchase a product through a link in this article.

The first time Meredith Blake appears on screen is from beneath the brim of an oversized sun hat. You could call it a shady look — literally. With the iconic headpiece, she wears a structured mini, strappy sandals, and a bold lip while loungeing poolside. Some might argue her ensemble is ill-suited for the setting, but Meredith’s looks are never, ever understated.

If I looked this good, I’d be annoyed to get splashed by some kid, too.

Meredith means business. The next time she’s on screen, she’s sporting an expertly-tailored pinstripe matching set, worn while delivering the iconic line about planning to send Annie (as Hallie) to a boarding school in Timbuktu. Another favorite look is the above gray duster worn over a black mini. Her hard-working pursuits are reflected in her clothing choices, and Meredith perfectly balances business-casual demure with ultra-feminine debonair.

Pair these wardrobe staples with a timeless black handbag, or a martini.

Ah, the power of an LBD. For Meredith, this is the slinky black number that prompts Elizabeth to refer to her as the “leggy tight-skirted barebacked fiancé”. This dress is the moment, equipped with a sultry, strappy back and an understated front. And of course, her dainty gold jewelry certainly doesn’t hurt.

Honestly, if I ever ran into my SO's ex, this is exactly what I’d want to be wearing.

Let’s be real — if The Parent Trap was filmed today, Meredith would totally be rocking a Lululemon Belt Bag with this ‘fit, although I do adore the Prada backpack she carries in the flick.

Possibly the most memorable outfit in the entire film, Meredith sports an all-black fitted workout set with white trim to go on a camping trip where she does more swatting off mosquitoes than actual hiking. Whatever, she looks good doing it.