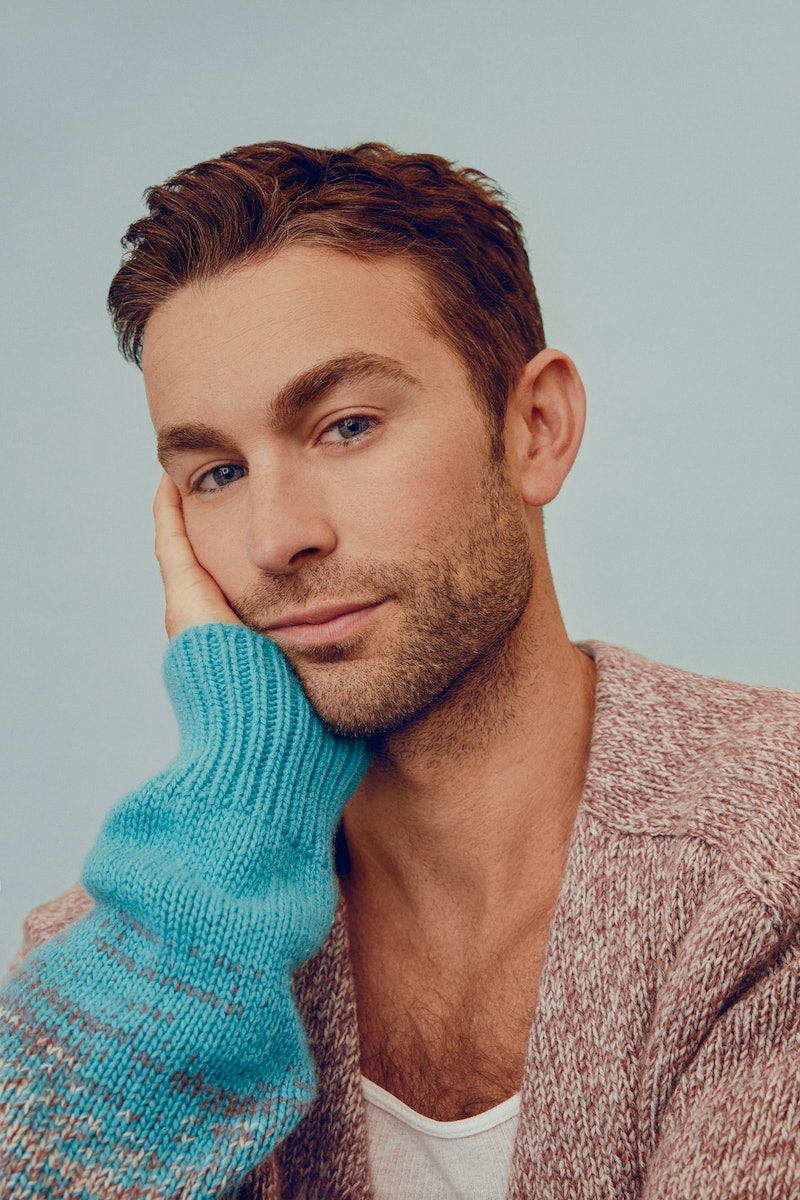 Chace Crawford is holding my phone, squinting at the screen like he’s trying to decipher hieroglyphs. “I have not even heard of that,” he says, his eyebrows alternately furrowing and raising, his lips pursing with concentration. He is looking at the “go piss girl” memes.

The image is familiar to all patrons of the Gossip Girl internet canon: Blair Waldorf smiling smugly above the show’s logo, now sloppily transposed from “gossip girl” to “go piss girl.” The memes became a thing in the heady days of April 2020 quarantine, but their notoriety passed Crawford by — until now. “That's hysterical,” he says after a few moments, before drawing to a pause. “This is testing what little sanity I have left.”

Sanity is a scarce commodity these days, even for really, really, really, ridiculously good-looking people like Crawford — the kind of people with such thick, luscious eyelashes that they surely must have drowned themselves in Latisse, except that then their crystal blue eyes would be filled with dirty brown flecks, and they most definitely are not. The kind of people who maintain bulging, as-big-as-my-head biceps to play superheroes on TV (in his case, The Deep, an Aquaman dupe on Amazon Prime’s Avengers sendup The Boys).

Crawford, 36, has plenty to be optimistic about. The Boys has just been renewed for a fourth season, and he’s got two movies — the murder mystery-comedy Reunion and the biker gang drama Riptide — in the works. He’s even starting to see the light at the end of the tunnel, pandemic-wise: Last night, he went to a live show at the Comedy Cellar for the first time in three years, and was happy to discover “we can still find some things to laugh about.” But he’s not immune to existential despair. “It's dark times,” Crawford says, staring into his cup of coffee. He’s not wrong.

Crawford is, as they say, going through it. Though he skirts around the details, he alludes to a difficult breakup somewhere in his recent past, though he’s resisted circling the drain by putting his effort into searching for the meaning of it all. “When we all go through a tough breakup or the death of a family member, what do you turn to?” he says. “A lot of times it's poetry, you know what I mean? It's a book.” Viet Thanh Nguyen’s Pulitzer-winning The Sympathizer is on his bedside table right now, but he lists titles as disparate as Lori Gottlieb’s self-help tome Maybe You Should Talk to Someone and the Bhagavad Gita as useful texts; podcast-wise, he’s partial to The Moment with Brian Koppelman. He also practices Transcendental Meditation on and off, which he says is like “natural Xanax.” He considers himself a spiritual person. I ask if he’s ever been approached — or tempted — to join one of the many cults endemic to Hollywood; he hasn’t, except for one time when a guy flashed him a curious ring and maybe said something about a Masonic Temple. It didn’t appeal. “I feel like that one's not cool anymore,” he jokes.

All of this could come off as pretentious, were he not so earnest. When I ask him about something he hasn’t considered before, he thinks aloud and concludes with an honest, “I don’t know” when he’s still unsure. He cites his network of close friends — collected over the years from high school, his studies at Pepperdine University, his time in New York, and elsewhere — as his bulwark against insanity. There’s no girlfriend to lean on at the moment, but it is what it is: “LA’s a tough [dating pool],” he shrugs.

Crawford’s story is as all-American as they come. He attended the same small Catholic school from grades 5 through 12. He was “always that kid who did that one thing in sixth grade,” he says, citing the many times he spilled things on himself, and that one time his mom gave him pull-through-cap highlights, which he paired with braces and a puka shell necklace. “There's photos of that somewhere,” he says, cringing.

He tried football, but stopped when his dad pointed out that he likely wouldn’t grow taller than 6 feet, which is downright shrimpy by Friday Night Lights standards. (Ironically, Crawford’s dad would get a football-playing son after all when his daughter Candice married Tony Romo.) He worked a summer job he hated at Abercrombie & Fitch. “You could smell that fragrance from the parking lot,” he says, wincing. Did he ever work the door, as a part of the store’s shirtless welcome committee? “I think they may have asked,” he admits. “I was like, ‘There's no chance in hell I'm doing that.’”

He later found a better use for his talents. After a short stint at Pepperdine, some acting classes, and a day job as a valet, he was cast as Gossip Girl’s suave Nate Archibald at 22. Through the ensuing media frenzy, Crawford was remarkably clear-eyed about fame and his place in the industry. “I’m not ignorant to the fact that part of the reason why [Gossip Girl]’s popular and part of the reason [why] people want to see it is to be like, ‘Oh, novelty boy! Hot boy! Pretty boy!’ And that’s all fine and good … There are a lot of people that try too hard to be the starving actor and to be really pseudo-intellectual and dark, when, really, there’s a business side to manage and push towards,” Crawford told WWD in 2009. When I read him back the quote now, he smiles, a little baffled. “That's amazing I said that at 22 or whatever,” he says. “I guess I understood at the time that there's definitely a type. There's a look and a certain thing that was involved with [Gossip Girl] … I can see my lane.”

For evidence of Crawford’s clear-eyed disposition, look no further than the 2021 Saturday Night Live episode hosted by Kim Kardashian, in which Crawford makes a cameo in a skit spoofing The Bachelor. “Thank you for telling me about your gigantic hit show Gossip Girl,” Kardashian says as she hands Crawford a rose. “I’m also on The Boys, but uh, okay bye,” he gamely replies, shuffling offstage in feigned embarrassment.

Crawford is also on The Boys, which has been a rare opportunity for him to veer outside of his prescribed lane. Sanity-wise, it’s less ideal. The show’s plotlines rub his nose in everything that’s going wrong, from the rising tide of fascism to the spread of online misinformation. Crawford recites showrunner Eric Kripke’s mantra: “What’s bad for the world is good for the show.”

In Season 3, Crawford’s character The Deep spends most of his time trying to claw his way back into the public’s good graces after he was outed as a sexual predator in Season 1. “He’s pretty irredeemable,” Crawford says. But like many a malignant, un-self-aware public figure, that hasn’t stopped him from seeking redemption. Mercifully, because this is The Boys — the show that ran out of fake semen while shooting an orgy and maybe scarred a camera operator for life — The Deep’s journey gets to be funny and absurd, even when it’s bleak. This season’s comedic escape hatch comes in the form of an octopus with whom The Deep shares a particularly special connection — so much so that he’s shown consummating their relationship. The night before he was scheduled to shoot the interspecies sex scene, Crawford woke up in a panic and called Kripke. “I was like, ‘Man, what are the camera angles going to be? We gotta figure this out,’” he says. “He had to talk me off the ledge.” Consider it Crawford’s greatest acting challenge on The Boys yet.

The Boys is indebted to Crawford not just for pretending to fuck an octopus, but for making a character work who, on paper, shouldn’t work at all. We should hate The Deep, and we do, kind of — but somehow, Crawford defangs him, gives us permission to see him as comic relief. “To make such an abhorrent character so watchable and engaging takes a special actor,” says Katy Breier, who plays Crawford’s wife on The Boys. “The man’s got a heart of gold.”

The Deep lets Crawford weaponize his chiseled jaw and piercing blue eyes, rather than use them to woo a love interest (and, by proxy, the audience). He was also almost too well-endowed: When the show first began filming, Crawford wore a very noticeable prosthetic penis under his super-suit, but when the Amazon bosses got wind of it, the bulge had to be edited out. “The self-deprecation and making fun of this guy, it's really freed me up,” Crawford says. “People look at you more seriously.”

A lot has changed since people first sized Crawford up and placed him in the “heartthrob” box. The original Gossip Girl, now a full decade off the air, has a quaintness to it: Its pilot predated the expectation of diversity in casting and, perhaps most crucially, the Great Recession, beginning its tale of teenaged one-percenters before Occupy Wall Street and its ilk brought the term “one-percenter” into the lexicon, along with a simmering eat-the-rich sentiment that’s come to a boil in recent years. (Naturally, in HBO Max’s Gossip Girl reboot, the kids are aware of their privilege, which ruins the fun of watching them wield it.) “It’s funny to think that [our show] was so controversial back in that time,” he says, comparing Gossip Girl’s sexuality to that of the far grittier Euphoria.

There’s a quaintness to Crawford, too. His ennui has the flavor of disappointment, of someone who simply thought we were better, and was unmoored to find that we were not. Now, his worldview thoroughly shredded, he’s stuck sorting through scraps, deciding what’s worth holding onto. It’s an arduous, never-ending process — one I glimpse at the end of our time together, as he grapples with the fact that people have begun using “go piss girl” as a synonym for Gossip Girl. “What do I do with this information?” he asks himself as he scoots out of our booth. “I don’t know.”