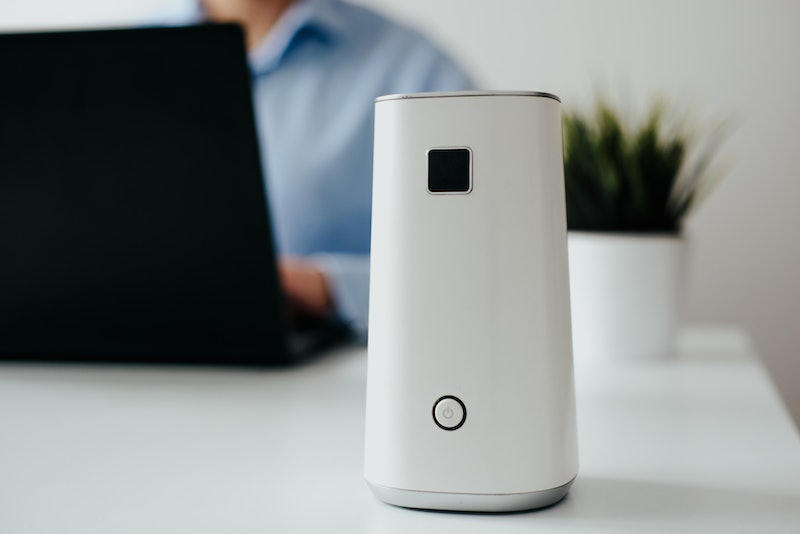 In a lot of ways, the best air purifiers for your office are the best air purifiers for any other room: They'll be optimally suited for the size of your space and offer the right purification systems for your needs. That said, if you're looking for an air purifier that makes your workspace way more comfortable and productive, you should also prioritize quiet technology and a sleek design (both physically and in terms of usability), so it won't be a distraction.

What To Look For In A Workspace Air Purifier

Before you get to shopping, measure your home office or other workspace to calculate the square footage. Different models have varying intended room sizes, and this should be your first determinant when choosing one. After all, an air purifier might have great reviews and four stages of purification, but if it can't handle your 300-square-foot office, it's not worth the buy.

Next, ensure that your air purifier has a wide range of purification systems to trap the most impurities. Top-selling brands most commonly feature three types of purification: a pre-filter (which captures larger particles like hair and dust), a HEPA filter (which is short for high-efficiency particulate air and traps small particles like pollen, dander, and smoke), and an activated carbon filter (which absorbs unwanted odors). Any combination of these should suffice, but some higher-end models offer additional purification abilities, like a UV-C light with its potential bacteria, mold, and virus benefits.

After that, check the dimensions and decibel levels (if available). That information, in addition to the reviewer feedback surrounding volume and ease of use, will ensure that your purifier will not only fit well in your office, but it'll be quiet, easy to operate, and convenient.

Shop The Best Air Purifiers For The Office

In a hurry? Here are the top picks for office air purifiers.

This LEVOIT air purifier has more than 60,000 reviews, a 4.7-star overall rating, and a number-one best-selling status for HEPA-filter air purifiers on Amazon. Due to its three separate filtration levels (pre-filter, HEPA, and activated carbon), it's a reliable option for most rooms — but it has a few great features that make it well-suited for an office. For one, its sleep mode only produces 24 decibels of noise (about as loud as a whisper) for distraction-free work. For another, it is compact and unobtrusive for desktop placement, but it still offers enough coverage for rooms up to 219 square feet. Finally, it's extremely easy to operate with its on-device controls, built-in timers, and multiple fan speeds.

One reviewer wrote: "This is a great little air purifier. I bought for the office at an auto repair shop. It has significantly reduced the amount of dirt/dust in the office. It runs non-stop and keeps performing.”

2. The Most Affordable Desktop Option

At less than $60, the KOIOS air purifier is shockingly affordable — especially considering it offers the same three filtration stages of units that are twice as expensive. While the exact square footage isn't disclosed, reviewers report that it easily cleans the air in smaller rooms. And since it can fit effortlessly on your desktop, it won't get in the way of your work schedule. It's also quiet (as little as 25 decibels), really simple to use with its single-button control, and has a soothing blue light. There are two fan speeds.

One reviewer wrote: "Wow what a difference in just one day. It was so easy to set up. Love the size because it fits easily on my desk and makes life better working with a heavy smoker when you are allergic to tobacco. One of my coworkers said she found a huge difference too since we didn't spend the day sneezing.”

3. The Best Air Purifier With UV Light For Small Rooms

Like other models in this price point, the Germ Guardian air purifier has a pre-filter, a HEPA filter, and an activated carbon filter to tackle hair, dust, odors, and more. Unlike many of its competitors, however, this one also has a built-in UV-C light, which is designed to tackle airborne bacteria, viruses, and mold. It's not the most space-savvy option, but it's relatively quiet at 40 decibels (as loud as a library or bird call) and its upright design can be placed in a corner or beside your desk.

One reviewer wrote: "I’ve had this device for four years now, and it’s worth every penny! [...] I bought a unit for my office, and it’s great - not distracting at all. Our office manager even ended up buying several for our conference rooms last year and they’re still running beautifully.”

For spaces as large as 500 square feet, there's this LEVOIT air purifier. It has a washable preliminary filter, a HEPA filter, and an activated carbon filter to tackle a wide range of airborne impurities. Most importantly, even though it can handle everything from small bedrooms to living rooms, it has a surprisingly compact design that resembles a paper shredder. Get it in your choice of white or gray. With a lowest noise level of 23 decibels, it's also very quiet.

One reviewer wrote: "Bought this for my office that’s about 280 square feet. Set the timer for 8 hours, and let it go to work. Adds [peace] of mind in an old dusty office/equipment room. Recommended.”

5. The Best For Open-Concept Spaces

Finally, for massive rooms or open-concept spaces, there's the Coway Airmega 400. This smart model senses indoor air quality in real-time and works to purify areas up to 1,560 square feet. It also has built-in timers and lets you know when the filters should be replaced. While it's not the most compact option, it's still sleek, easy to use, and quiet (43.2 decibels at its loudest or about the noise of a library, and whisper-quiet on the lowest setting).

One reviewer wrote: "It speeds up about the same time every night, when the humidity level rises and I start coughing and sneezing. It also changes the color of its light so you know when it's working extra hard. It's almost silent on the lowest speed and I barely notice it at the next speed up. Even at the highest speed it's reached so far, it doesn't interfere with what we're doing. We have an open concept, so it has a large area to cover. So far, I'm very pleased with the job it's doing.”

More like this
The 4 Best Portable Air Conditioners Without A Hose
By Nina Bradley
These Weird But Genius Things Are So Popular, Amazon Can Barely Keep Them In Stock
By Maria Cassano
The 6 Best Vacuum Seal Containers
By Cristina Sanza
The 6 Best No-See-Um Repellents
By Masha Vapnitchnaia
Get Even More From Bustle — Sign Up For The Newsletter

This article was originally published on Feb. 13, 2021